As I said on my Instagram I had no idea I was a mascara junkie. I have so many open mascaras and let me tell you, that’s not a good thing. After trying that many mascaras and having so many opened, I have learned that only one good mascara should be open for so many reasons. First of all mascaras expire and should be thrown out every three to six months, therefore, you will not be able to get the best use out of every mascara through the duration of six months. When you have so many mascaras open you realize that they all turn the same and you do not feel the difference between so many different mascaras. I always end up going for the one that is my favourite and grab for only one and one only. Out of the bunch above there are ones that I absolutely love because of their brush, formulation, etc. There is only one out of the ones above that I really do love and been using everyday for the past month. Now I only started to pick mascaras according to their brush. I personally do not care what the mascara claims to do, I only buy the mascara according to its brush. If you would like me to tell you the difference between brushes please comment down below and I will make a new post about Mascara Brushes. Now let’s make this short and sweet about the mascaras above. 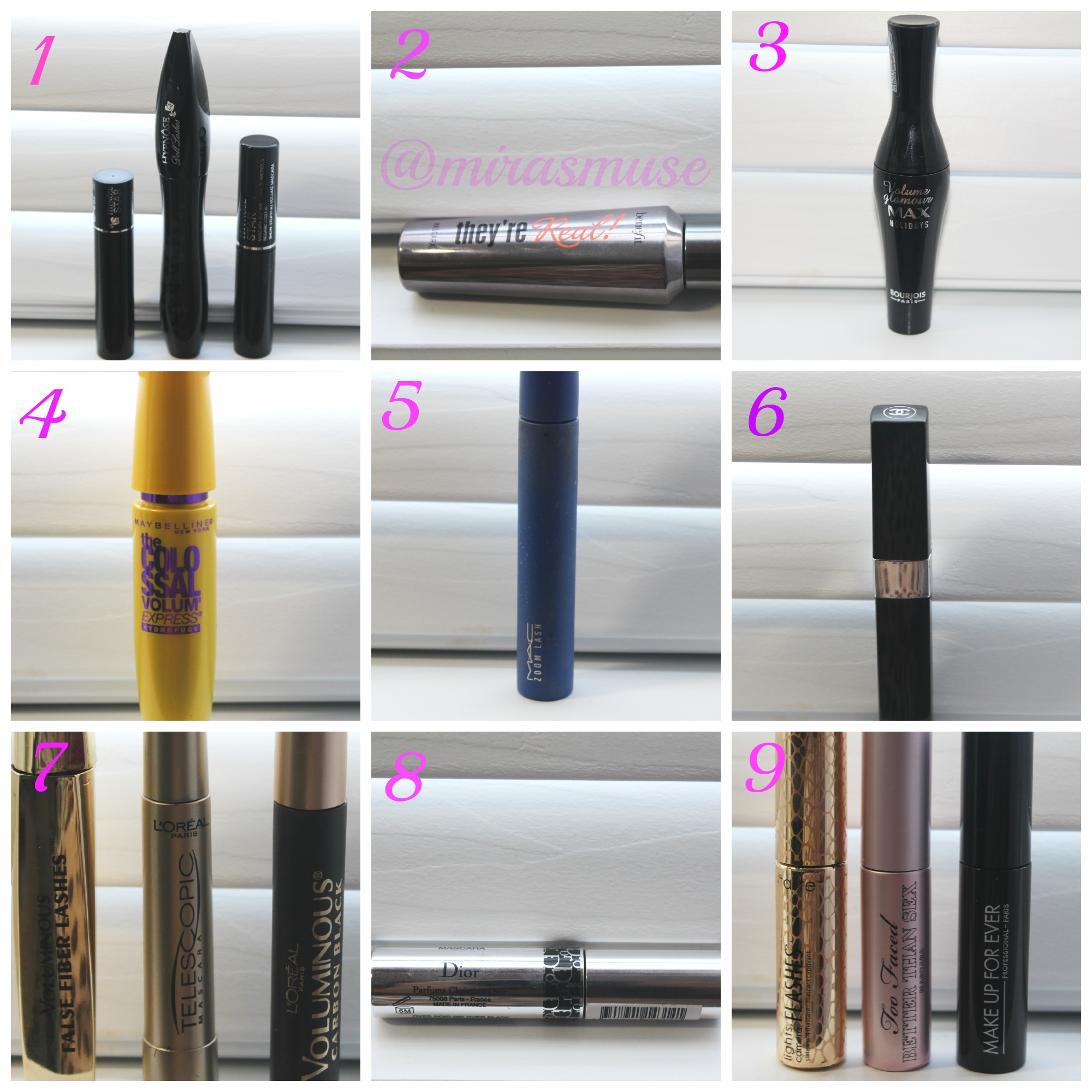 1) Lancome Star – Lancome mascaras have always been great for me and been using them for the past 8 years but at this point I just don’t feel that they give me the extra drama I want. They have a great formulation, great brush, but nothing special. I definitely prefer Lancome Star over the Doll Lashes

Lancome Doll Lashes – This mascara is great at separating your lashes but the formulation of this mascara is not as wet as the Lancome Star.

2) They’re Real by Benefit – This mascara hurts me. It is too rough on the lashes especially that I have short ones. The brush is quite rough and not gentle because it has plastic bristles rather than actual brush bristles. This might be good for people with longer lashes so you don’t have to get so close to the lash root and hurt yourself like I do all the time.

3) Bourjois Volume Mascara – I did not even buy this mascara because it just came in a package with other gifts, but I always heard great things about Bourjois’ mascaras. But to me the brush was too thick and it was not up my alley at all. Another down side was its formula being too dry.

4) Maybelline Colossal Volume Express – This mascara has a great formula and its great at separating the lashes but it does not give me the volume I want. This mascara is great to keep on the side for the days that you want to apply false lashes and you do not care about which mascara you’ll use because at the end of the day, it doesn’t matter with false lashes.

5) MAC Blue Mascara – This mascara has a great brush, great formulation, and it makes my lashes look great. MAC brushes are really great and many makeup artists use them.

6) Chanel – I have already reviewed this Mascara in one of my early posts since I started blogging almost a year ago, saying that this mascara was the one that made me fall in love with wearing mascara. I used to always have one Lancome mascara, but I never wore it. When I discovered this Chanel mascara, I have a completely new take on mascaras and beautiful lashes. So it is definitely recommended.

7) L’Oreal Fibre Lashes – A total miss, I don’t like this mascara at all because it is completely chunky although L’oreal mascaras have a great formulation and brushes, but that one was just horrible.

L’Oreal Telescopic – One of my favourite mascaras because it really lengthens the lashes due to its brush. It is especially great for your lower lash line because it does a great job at separating and volumizing when layering the mascara.

L’Oreal Voluminous false lashes – I absolutely love this mascara because it has an amazing brush and formulation, it makes my lashes both long and voluminous. It does not get chunky and it feels like you’re wearing a luxurious mascara. The only downside about L’oreal mascaras is taking it off, while washing the face, their mascaras just go crazy and it takes a lot of effort to remove it off my whole face.

8) Dior Show – heard many great things about this mascara but to me it is nothing special, I don’t like the formulation because I find it to be too dry, and the curved brush is definitely not a favourite to me.

9) To save you from reading so much the Makeup Forever is not such a great mascara, The lights Camera Lashes by Tarte is a dupe for They’re real by Benefit, and you know my thoughts already. As for Too Faced Better than Sex mascara – it is definitely a great mascara with great formulations and it does a great job fanning out my lashes but I am not a favour of the brush because it looks like an hourglass, which is a bit thick for me. I have short lashes, and any thick mascara wands make it really hard to get close to the lash root. It is a great mascara, and definitely recommended, but just not the perfect one for me.

This post has probably been the longest one I have ever done, I hope it was organized and useful enough. As a recap, my favourites were Chanel, L’oreal Voluminous and Telescopic, and finally Too Faced Better Than Sex. Although I do have another current favourite that I have been using every single day, I will keep it for another post, so it can get its fair share. 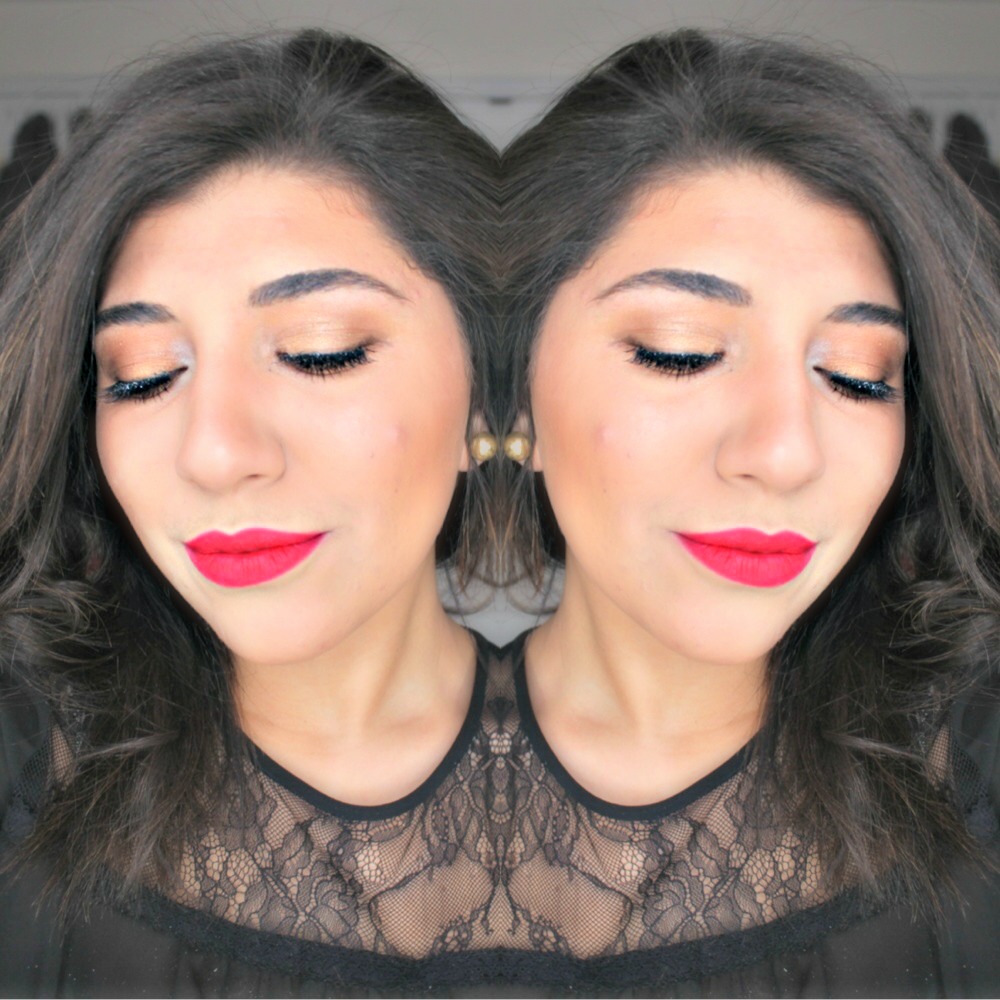 Beauty of Sponges – Beauty Blender VS. Real Techniques + HOW TO

How TO: Shape Eyebrows with Amazing Products!

Last Post of The Year: Featuring an AMAZING Palette